Confirmed: Here is why PassionAir has suspended…

Police swooped on ‘prostitutes’ in Ho 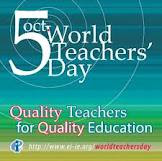 “But for women, the Ghana Education Service may have collapsed”, this is according to Dr Jakpasu Victor Afun, Rector of the Ho Polytechnic, who was speaking at a durbar of teachers to mark this year’s World Teachers Day on the theme “Teachers for Gender Equality,” in Ho on Wednesday.
According to him, in the late 1970s and early 80s, women were the people who hold the fort when most men were running away from Ghana to Nigeria.
Dr. Afun said due to the effort of women teachers, many different professional women are being churned out to compete favorably with their male counterparts. He said Gender parity in educational opportunities is imperative for accelerated national development and as such for the world and that matter Ghana to achieve the millennium development goals on schedule, there is the need to get women on board.
He therefore called for non discrimination against women since they have a lot to offer for the development of the country.

In a speech read on his behalf, Mr Samuel Alobuia, Acting National President of Ghana National Association of Teachers (GNAT) said while teachers strived to put in their best, other stakeholders in education should also play their part more effectively to facilitate better results.

Mr Alexander Mawusi Buadi, Regional GNAT President said it will be wrong to apportion blame to only teachers in this time of poor educational performance. He also complained about the inability of the GES to absorb teachers from study leave without pay, back into the system and the long delays in placing 2010 newly trained teachers on their official salary scales.
The Regional Minister, Mr Joseph Amenowode, said teachers’ performance is major factor to the abysmal performance in the recent Basic Education Certificate Examination and promised government commitment to better the lot of teachers to help reverse the situation.
A retired Educationist and a former Ho municipal director of education Mr Francis Korwu, said the package needed to be given to teachers to give them the verve to work are not being delivered early enough and therefore called on government to provide the incentives it had consistently promised teachers, some of whom work in deprived areas to motivate them to improve on their performance.
Mr Korwu also called for circumspection in the posting and transfer of lady teachers to some duty posts, so as not to jeopardize their lives.
In all, 30 teachers and non teaching staff including three staff of the regional GNAT secretariat were awarded for meritorious service to GNAT over the years.
Click link and listen to Dr. Afun and Joseph Amenowode audios

The Woes of a Rural teacher

‘RIGHT TO INFORMATION, TOO MANY BLANKET EXEMPTIONS’

Three severely injured in a vehicular crash at Ho Barracks