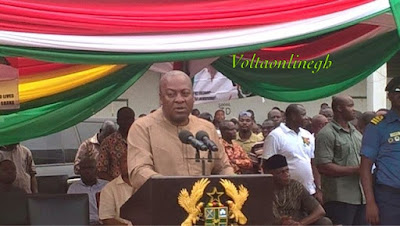 President John Dramani Mahama has on Tuesday  justified his ‘Accounting to the people tour’, which  is aimed at showcasing projects done by his government across the country and to interact with Ghanaians.
The tour which has already  taken the President to the Western and Eastern regions in the past weeks, has been fiercely criticized by some critics including the opposition New Patriotic Party, describing it as an ‘abuse of incumbency’ which the President is taking advantage of to campaign ahead of the November 7, elections.
However, speaking on the third leg of the tour to inaugurate the Dodo-Pepesu to Nkwanta section of the Eastern Corridor road in the Volta region, President Mahama explained that, he is only rendering account to Ghanaians who gave him the mandate during the last election.
According to him, just as chiefs organized regular durbars to update their subjects about development in their areas, it is just prudent for him as the president to update Ghanaians about projects and programmes his government has undertaken in the last three years.
“When you are put in a position of leadership, it is necessary for you to account to your people and tell them  how  you have discharged that responsibility and also interact with them to ask them, what more they expect from you,” he noted.
He noted that, his government in the last three years has undertaken massive infrastructure projects in various sectors across the country, which has to be accounted for. 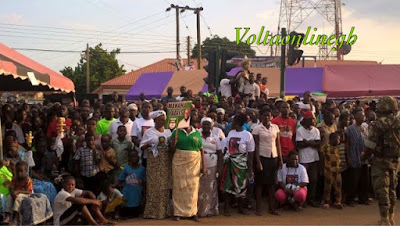 Touting his achievements at Hohoe on day one of his 3 days tour, the President stated that “in all the regions I have inspected and commissioned projects, be have interacted with the traditional leaders and the people to discuss other projects that they want government to undertake. If you look at the track record we have been able to achieve, it is phenomenal, from electrification, to water, healthcare, education, definitely the track record of this government is an enviable one.”
He however reiterated his  government’s commitment towards the completion of various ongoing projects in the region including the entire eastern corridor road project to enhance the socio economic activities along the stretch.
The President also indicated that, 10km of roads within the  Hohoe township will be asphalted as part of the urban roads improvement project. 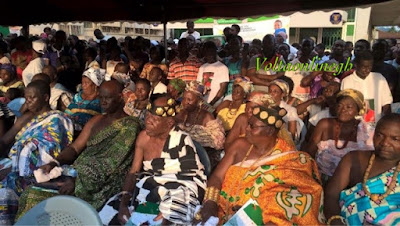 Earlier, President Mahama and his  entourage which include, the communication minister, Dr. Omane Buamah, Roads and Highways minister, Alhaji Inusah Fuseini, the Volta regional minister, Helen Ntoso also inspected progress of work on Dapa- Pampawie- Ahamasu Junction Cocoa road project and met with Chiefs and elders of Kadjebi, where the President hinted of plans to distribute free cocoa seedlings to farmers to boast cocoa production in the area and other parts of the country.
Source: @Lambert_Coffie/Voltaonlinegh
previous post