A strong wind which accompanied a downpour in the Volta  regional capital of Ho, on Monday afternoon has colapsed some transmission masts belonging to some radio stations and a telecom company  in the area.
The rainstorm which started at about 4:00pm and lasted barely 40 minutes brought down the masts of Ho based KuulFM and ToshFM as well that of  telecom operator  Glo Ghana, which were  all situated on top of the Galenkui mountain near Ho.
The situation has compelled the stations to go off air for the mean time, while they assess the extent of damage. An electricity transmission pole located within the same vicinity was also affected,  leading  to cut in power supply to some parts of the municipality.
Checks in  other parts of the municipality revealed  that, the rainstorm also ripped of portions of the roofings of the Vodafone Ghana regional office,  while some bill boards have also been pulled down. No casualty was however reported in the disaster. 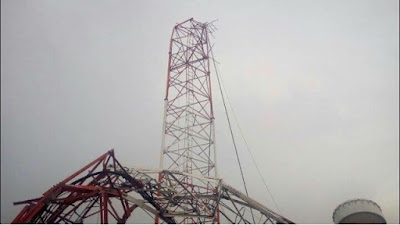 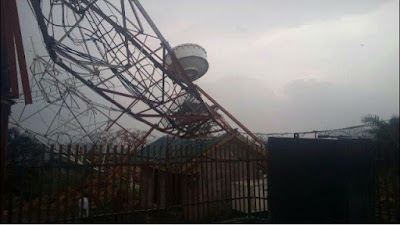