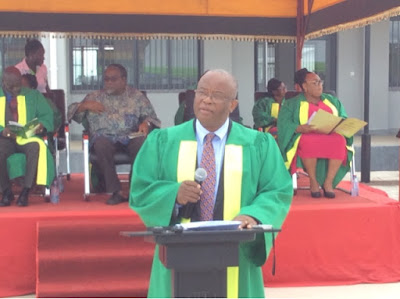 The vice chancellor of the University of health and allied science (UHAS) in the Volta region, Professor Fred Binka has noted that, the university is progressing steadily in delivering on its mandate of training world class health professionals to meet  the country’s healthcare needs.
According to him, the university which is in its third year,  has a seen a “steady but huge increase in the number of applicants who wish pursue their dreams of becoming health professionals.”
“Last year we received 2011 applications for the 2014/2015 academic year and we were only able to offer places and enrolled 458 students. This year the total number of applicants have doubled. We had 4124 applications to which 829 have been enrolled”
Speaking at the  fourth matriculation ceremony of 829 fresh students for the 2015/16 academic at the university’s newly completed permanent campus at Sokode-Lokoe in Ho, Prof. Binka also underscored the impact of the first public funded university in the region, is making on people across the a cross the region through its community service programme and assured the students of wholistic theoretical and practical  training.
“We are really proud of our vocational training programmes.. This is a pillar of our community service pillar, through which we’ve successfully deployed close to over  thousand students to work in the region this year. Bringing us closer to the people of the region and forging the necessary partnerships that we desire.”
“You will all experience the vocational training activity this academic year when you go to work in the districts in July of 2016. This will give you the opportunity to acquire the skills you need in your career development.”
He also lauded the support, the infant university is receiving from Municipal and district assemblies in the region,towards the provision of facilities at the various hospitals to aid the on the field training of students.
Prof. Fred Binka, who is foundation Vice chancellor of UHAS  further hinted of ongoing processes to introduce more programmes including Masters (Mphil) and doctorate (PhD)  programmes to the existing fifteen undergraduate programmes  being run in the university.
According to him, the “innovation programme” which will be offered at the school of public health in Hohoe, would have five areas of concentration; Monitoring and Evaluation, Health Systems, Reproductive Health, Public Health Nutrition, and Epidemiology.
Prof. Binka said the University also planned to start its Pharmacy Degree Programme in the School of Pharmacy in the 2016-2017 academic year and also run certificate courses for national teams in the School of Sports and Exercise Medicine (SSEM).
UHAS currently  operates five out eight schools, comprising School of Basic and Biomedical Sciences, School of Medicine, School of Nursing and Midwifery, School of Allied Health Sciences and school of Public Health.
Established by an Act of Parliament, Act 828 in December 2011,  the University which currently operates from campuses in Ho and Hohoe, will comprise eight schools and three institutes dedicated to health-related issues. 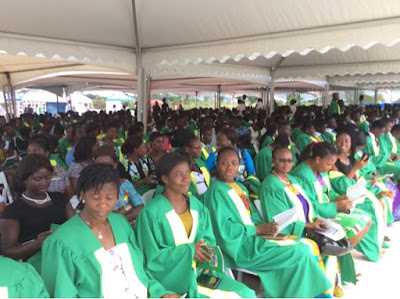 Pencils of Promise removes schools under tree in Adaklu

Deputy Min. calls for revamping of Arts and Culture in Schools

‘We need a generator’-Volta school for the deaf appeals