Residents of Kpetoe the capital of Agortime-Ziope district of the Volta region are still counting their losses as part of the town was submerged by flood waters after River Todze overflowed its banks in the area Wednesday night.
The flooding which occurred at midnight collapsed about 100 buildings, killing one person and injuring several others, according to NADMO officials.
The injured persons, including the pregnant wife the deceased are currently receiving treatment at the regional hospital in Ho.
The only health center in the area has also been taken over by the floodwaters, thereby halting health care delivery. While the bridge connecting the Ho-Aflao road has also been submerged, causing inconvenient to motorists plying the road.
The situation has brought lots of socio-economic activities to a halt with many victims trying to relocate as NADMO officials assess the situation. 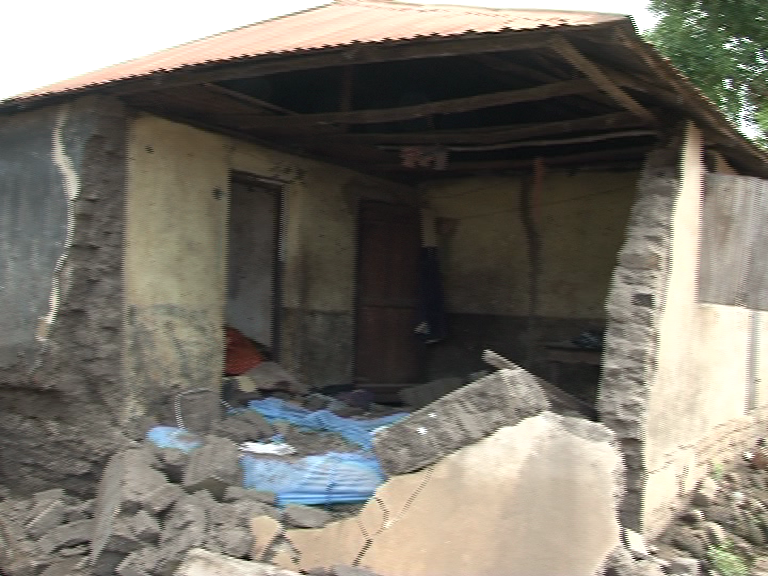 According to Mr. Simon Bakar, the Volta Regional Coordinator of the National Disaster Management Organization, (NADMO), the water level ranged from the knee to the average height of man depending on the location.
He explained that the deceased is a middle aged man who was with his pregnant wife and two children. The family of four was sleeping in their home when water began to submerge the building which had obviously suffered similar floods over the years.
Before they could know it, the building was tumbling down. Mr. Bakar and him men Mr. Bakar and his men who have been in the area since 1:00am after the flood began at about 12 midnight took the man to the Volta Regional Hospital in Ho.
He said Doctors at the facility, popularly known as Trafalgar confirmed to him at about 7:00am that the man had passed on, while the pregnant wife and two children were safe and sound. Other security personnel and volunteers forming a rescue team have also been in the area since midnight.
Mr. Bakar, the Volta Regional Coordinator of the National Disaster Management Organization, (NADMO) noted that the flood waters were as a result of the overflow of River Tordze. He said an assessment of the submerged Health Center at Kpetoe shows that the entire facility is not fit for use and hence needed to be relocated immediately. This, the District Chief Executive (DCE), Michael Komla Adjaho alluded to.
He conceded that the extent of damage was quite great and that urgent measures were being put in place to ameliorate the situation. He therefore called on other faith based organizations, relief agencies and philanthropists to come to the aid of affected communities.
The river which has its source from the Republic of Togo also has other sources within the region joining it at various points along its path. Following a series of rain falls in the republic of Togo and the, the river overflew it banks, a situation which happens annually.
Currently bridge constructed at Kpetoe to link Ho, the Regional Capital to Kpetoe and other communities and districts along the Ho-Aflao highway have been totally submerged. Travelling along the route is almost impossible now as motorists and passengers are all stranded.
To this end scores of vehicles upon reaching the Kpetoe Bridgbe from Ho, had to be returned as well as those from the opposite side, thus Aflao and co. However, stronger vehicles that could cross were also guided by residents and the rescue team as to how to cross over.
Mr. Bakar said “the situation is serious and as you can see, about one-third of Kpetoe is under water.” He said snakes and other poisonous creatures have been spotted floating in the water, adding that “a very huge spitting cobra, like the size of my thigh has even been killed not long ago.”
According to him, the extent of damage was still being assessed, but in the meantime school children have been urged to stay home, farmers are advised not to go to the farm and vehicles are being urged to return to avoid any fatalities.
More so, affected person were being relocated and documented to help mobilize the necessary relief items for them.
previous post

Pencils of Promise to boost Education delivery in Volta region

President of IHDN Mission Hospital Calls on Public for Support