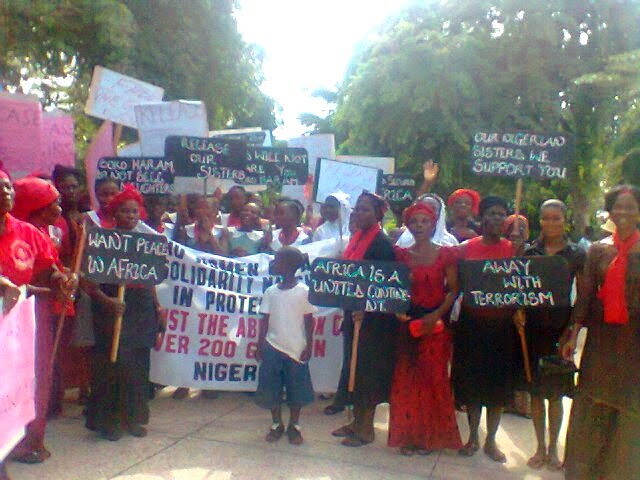 The global campaign, “Bring Back Our Girls” pushing for the return of over 200 kidnapped schoolgirls by the Boko Haram militants in the North-eastern Nigerian town of Chibok has hit the Volta regional capital of Ho over the weekend.
The campaign saw dozens of Christian and Moslem Women clad in mourning attires, including some school children embarking on a peaceful solidarity marched through the principal streets of Ho, from the RTC Park to the Pleasure Gardens, early Saturday morning. Among them was also the Municipal Chief Executive for Ho, Mrs. Fafa Adinyira.
They carried placards with inscriptions ‘Boko Haram, do not kill our daughters’, ‘our Nigerian sisters, we support you’, ‘away with terrorism’, ‘Africa is a united continent’, ‘release our sisters’, among others. They sang songs calling on the various stakeholders to join hands to search for the girls, who have being in abduction for over forty days.
Addressing the protesters at the Pleasure Gardens, Madam Lena Alai, Volta regional director of the department of Gender, said the Nigerian government to do everything within its power to ensure the safe release of the girls to their families, who are in constant agony and pain, adding that the financiers of Boko Haram should be fished out and sanctioned appropriately.
She further stated that militants’ insurgence in Nigeria is a threat to the rest of Africa, and called on the Chairperson of the African Union, Dr. Nkosazana Dlamini Zuma, who is a woman to rally all women on the continent to condemn the atrocities of the Boko Haram, while the various heads of state takes steps to disband the group permanently.
Madam Alai also reminded the security agencies in Ghana to be on high alert at the borders especially the eastern border to prevent any spill over the monstrous group into the country, as the international community is intervenes.
Rev. Mrs. V.A Kporxa, president of the Ho Christian Women Intercessors Fellowship, called for continuous prayers for the safety of the girls and their families especially their mothers, who are going through a lot in these difficult times.
Some Moslem women also condemned Boko Haram and other terrorist groups  who commit atrocities in the name of Islam, describing their activities a ‘un-Islamic.’

They said Islam is a religion of peace and disassociate it from minority terrorist groups, who are trying to hijacked religion.