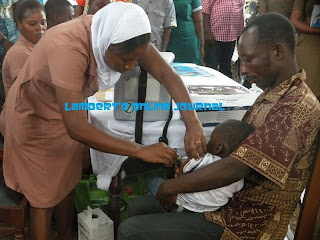 The nationwide vaccination campaign against measles and rubella has kick-start in the Volta region with a total of 950,073 children aged between nine months and 14 years expected to be vaccinated during the exercise scheduled between September 11 and September 20, 2013.
Immunization teams comprising 719 vaccinators, 2156 volunteers and 176 supervisors are stationed at markets, schools, lorry parks, prison facilities, health centres and any populated area whiles others would be moving in scattered communities and settlement across the region for the 10-day exercise.
Speaking at the Launch of the campaign in Ho, The Volta Regional Deputy Director of Health, Dr Winfred Ofosu, said the exercise had become necessary because statistics showed that the four-yearly vaccination interval saw the resurgence of the disease hence the need to interrupt with two-yearly vaccination cycles.
“We realized that in 2012 the number of cases have shot up unexpectedly, the number of people susceptible to measles is increasing at a fast rate than the four year interval that we were using in the past, that’s what has made necessary to conduct the campaign this year rather than 2014’.
Dr Ofosu said unlike anti- measles vaccination which started in Ghana in 1978, vaccination against rubella is a recent public health problem.  He said between 2010 and June this year, 1,371 rubella cases were confirmed, 96 of which were recorded between January and June this year.
He stated “Rubella is now here with us and introducing this vaccination is the start of control of rubella in the country”.
Dr Ofosu assured parents that the children would experience some mild side-effects after the vaccination but these are normal and short-lived. He further noted that those who are   already vaccinated against measles could go in for another vaccination in order to convert the vaccine into protection.
Mr Francis Ganyaglo, Deputy Volta Regional Minister, who launched the exercise said the 704 measles cases confirmed in the first six months of this year was “frightening” and cautioned parents that their children risked being exposed to serious health complication if they failed to make their children available for the vaccination.
Measles symptoms includes rashes, fever, runny- nose, cough and eye irritation, leading to complications such as ear infection, diarrhoea, pneumonia, seizures, brain damage, encephalitis and death. But Rubella manifests as rash in the face, mild fever and swollen lymph nodes or may not show any symptoms.
Pregnant women with rubella risked miscarriage or giving birth to children with defects such as eye problems, heart defects and mental retardation.
previous post