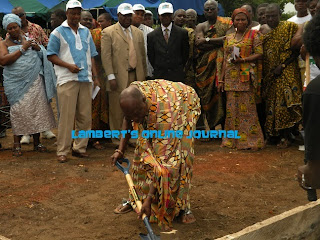 A sod has been cut on Tuesday for the construction of a state-of-the-art office complex for the Driver and Vehicle Licensing Authority (DVLA) in Ho. The Eight hundred and forty-five thousand dollars ($845,000) project, when completed would have a vehicle testing bay, banking facility, a restaurant and staff offices.
The project which is a brain-child of the Volta Region Development Agency (VORDA), to mark the 10th anniversary celebration of Togbe Afede XIV, Paramount Chief of Asogli State and President of Volta Region House of Chiefs, will be executed by Planet Sanitation and Constructions Ltd.
Mr Appiah-Danquah Kufuor, Chief Executive of Planet Sanitation and Constructions, disclosed that all construction jobs would be given to local artisans.
He said about 150 temporal workers will be engaged during the construction and 50 permanent workers will be employed when the facility becomes operational.
“All aspects of the project will be done by local artisans, in line with Togbe’s vision of creating jobs for the people”.
He also hinted that, a Fuel Service station will be set up around the facility when the Environmental Protection Agency (EPA) gives the go-ahead.
Togbe Anikpi III, Divisional Chief of Ho Heve, who cut the sod, said the project, among others, was to create jobs for the local people. He therefore called on natives leaving outside to return home and work.
The Paramount Chief of Kpenoe Traditional Area, Togbe Kotoku XI who donated the land for the project said “good times are here” and urged the youth to take advantage of the job opportunities to enhance their lots.
In a speech read on his behalf, Mr Rudolph Beckley, Chief Executive of DVLA, commended the chiefs and people of Kpenoe for releasing land for the project and said efforts were being made towards opening two other offices in the northern part of the Region.
He said when completed, the complex would help speed up the realization of the objectives of the Authority and position it to continue the drive in reducing road fatalities and optimizing revenue generation towards the achievement of the “Better Ghana agenda.”
Mr Beckley said in the past six months, the three DVLA offices in the Region registered a total of 2,923 vehicles and issued road worthy certificate to 23,555 vehicles.
He also said the authority has automated its operations to drastically reduce the work of middle-men popularly known as “Gurro boys’ and maximize revenue for the state.
The Volta Regional Minister, Mr Joseph Nii Laryea Afotey Agbo in a speech read on his behalf, said “Asogli in Ghana now means progress and development” and commended Togbe Afede for the foresight and pledged the support of the Volta Regional Coordinating Council.
The project which is located at Titrinu, off Ho-Aflao road is expected to be completed within seven months.
previous post