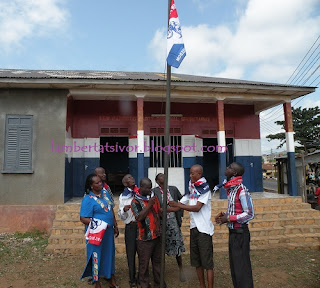 The New Patriotic Party (NPP) has been making steady progress in its electoral fortunes in the Volta region since 1992, said Mr. Ken Kodjo Ayim, Volta regional organizer of the party.
According to Ken Ayim, the party in the last election had fifteen percent of votes in the region, as against eight percent in 1996 and four percent in 1992; a trend he said is an indication that the Volta region is the future of the New Patriotic Party.
“People think Volta is the weakest for the party, but while other regions are at their peaks and declining, Volta is still increasing”, Ken Ayim said and noted that, it is an indication of how formidable the NPP is becoming in the region.
He however said the party’s doors are still opened for the good people of the region to join.
Mr. Ken Ayim was speaking at a flag-raising ceremony to mark the 21st anniversary of the NPP at the party’s regional secretariat in Ho on Thursday. Present at the ceremony were the some executives and leading members of the party in the region.
He said the NPP as the biggest the political party in the country since 1992, has contributed tremendously to the multi-party democratic dispensation of the fourth republic.  He stated the NPP’s  8years in government, led by President Kuffour brought the numerous social interventions programmes such as National health insurance scheme, school feeding programme, capitation grant, youth employment, among others  which brought a great relieve to Ghanaians.
“The party is so proud of President Kuffour, for the numerous social intervention programmes, which is without any doubt impacted the lives of ordinary Ghanaians”.
He also said the NPP is a pacesetter in the Africa, stating that “in Africa today, NPP has the largest electoral college to elect its leaders”.
Mr. Ken Ayim further stated that, it is only by divine orchestration that the NPP is marking its 21st anniversary exactly a week to the historic Supreme Court verdict on the election petition. “Those who believe God rules in the affairs of men should judge for themselves”, he said.
previous post