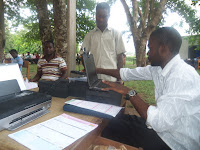 Some Officials undertaking the ongoing biometric voter registration exercise in Ho are calling on the Electoral Commission to pay their allowances due them.
According to the officials, they were hitherto oblivious of   how much they would be paid for the 40days exercise, until they read a press statement in the newspapers last week indicating that the Electoral Commission has released their allowance.
Part of the statement, which stated that a Registration Officer of each registration team, comprising the six registration officials, was to be paid an allowance of GH ¢50.00 at the end of the first, second and third phases of the exercise to facilitate the team’s movement to the next registration centre in the cluster. Whereas The Registration Officer Special Duties (ROSD) is also entitled to a daily allowance of GH ¢10.00 for forty (40) days as transport allowance to commute between the registration centre and the district office with data captured for export to the data centre. 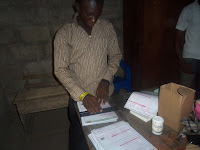 But officials who spoke on condition of anonymity, on the contrary disclosed that they only received GH¢ 20 and GH¢5 as transportation fares at the end of first and second phases respectively. These disparities have infuriated some of the officials who are said to be having hard time commuting to and fro their various centres.
They are therefore calling on the E.C to either clarify the disparities in the allowances or pay them their due otherwise; they will boycott the final phase of the registration exercise.
Meanwhile   Special Duties Registration Officers (ROSD) are also demanding electricity allowance as their colleagues in the rural areas, where there are no electricity, who receive fuel allowance of GH¢650 in other power generators to charge the equipment.
click link and listen to Aggrieved Registration_Officers_
In a response, Mr. Emmanuel Danso Ho Municipal Electoral Officer said in a telephone interview that, the GH¢ 50 allowance is paid at the end at the end of the first, second and third phases of the exercise to facilitate the team’s movement to the next registration centre in the cluster, stressing that it’s not meant for each team member.
He also disclosed that, the fuel allowance is meant for registration officials who were given generators by the commission to enable them charge the equipment in areas where there is no electricity, Stating that the commission has not made any provision for electricity allowance for officials working in areas with electricity.
Mr. Danso who lamented the manner in which some officials run to media with their concerns without sorting clarification from the E.C, urged them to channel their concerns thru the appropriate quarters for redress.
previous post

RAINSTORM CAUSE HAVOC TO BUILDINGS AT RESIDENCY AND SCHOOLS IN HO