The Minister for Trade and Industry Hannah Tetteh has disclosed that an agricultural produce clearinghouse that will connect all parts of the country will soon be introduced to create the platform for farmers to lodge their produce in warehouses and silos at vantage points where they will be traded and exchanged as in the case of stock exchange.
Hon. Hannah Tetteh said this at the official launch of the third Volta Trade, Investment and Cultural Fair, in Ho in the Volta Region on Friday.
She said the project which will be known as the “Ghana Commodity Exchange” will actively use mobile phones to disseminate information among market players and farmers and this will cut out the activities of middle men and ensure that farmers get the right prices for their produce.
Ms Tetteh said a billion-dollar of food produce was traded within three years of a similar project in Ethiopia, giving indications that the benefits to Ghana can be tremendous adding that the legal framework is being developed for the project to take off possibly next year.
The Trade Minister also announced that the Export Development and Investment Fund (EDIF) Act have been amended to include funding for the agriculture sector.

She also said the rural technology project has been renegotiated to cover more districts and under the project, technology enclaves will be established as nucleus for technical services build-up in the districts.

Ms Tetteh also said a Kente craft village is on the drawing board for the Agortime-Kpetoe area, and stressed the need for improvement in Ghanaian made goods, including kente, to stand competition.
She noted that the biggest challenge to industry and investment in Ghana is the unavailability of land in the required stretches for profitable business operations and the multiple claimants to those available. She appealed to traditional authorities to readily make land available in large stretches for the development agricultural and agro-processing industry to enhance the development of the region.
The Deputy Volta Regional, and chairman of the fair committee, Minister Cyril Necku, on his part, said has come to stay and commended the sponsors for their loyalty.
He also disclosed that a website will soon be launched to promote the fair worldwide and also attract investors and businesses to region. 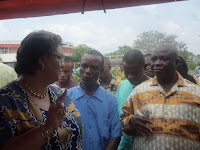 Dr Bernard Kwesi Glover, a member of the council of state and chairman for the event asked exhibitors to add value to their products by improving on their quality and packaging. He suggested the construction of a permanent trade fair centre in the region.
Mr Joseph Amemowode, Regional Minister said the ideal of the Fair, which is on the theme: “Volta Region: Investors Destination” is aimed at stemming the cycle of the region being the provider of labour for industries to other regions.
Awards were presented to Sponsors, including Agricultural Development Bank, Ghana Cocoa Board, Volta Prairie Limited, Rolider constructions and Diamond Cement for their contributions towards the success of the fair in the last three years.
The two-week fair which began on Tuesday, November 24, ends on Sunday December, 4 2011.
click link and listen to Hannah Tetteh
previous post