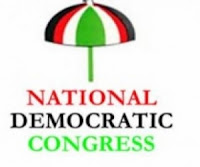 On Tuesday October 4th, 2011, the group demonstrated at the ruling party’s headquarters demanding the immediate dismissal of the National Security Coordinator, listing a litany of accusations against the Security Coordinator including the fact that security capo is using his position to impose his son, Nestor Gbevlo Lartey on the people of Hohoe North constituency as the NDC’s parliamentary candidate and as such creating political tension and incohesion in the Hohoe north constituency.

The group also accused the national security coordinator of masterminding the the dismissal of Mr. Victor Kondobrey, the formal MCE for Hohoe.

But in a statement read by Mr John Tenyoh Agbovi, Volta Regional Assistant for Political Programmes of the UCF,   the cadres debanged those allegations being leveled against Lt. Col. Rtd. Gbevlo-Lartey, describing them as fabricated, unfounded and malicious to destroy the hard won reputation of the national security coordinator.
The statement said, the leader of the demonstrators, one Hajia Sherifatu Sulley do not hail from any part of the Volta region and Mr. Reginald Seth Dogbey, who claimed to be an executive and signed the press statement that was issued out by the demonstrators is not a recognized member of the NDC in the Hohoe north constituency but rather he is an imposter misleading people for his parochial interest.

The statement also said the dismissal of Mr. Victor kondobrey as MCE for Hohoe due to his gross incompetence, corruption and mismanagement was appropriate and in the best interest of the municipality and any attempt by any group of people to fight for his reinstatement would be a regrettable mistake.

The statement also said the expression of interest by Mr. Nestor Gbevlo to contest the parliamentary primaries for the Hohoe north constituency is not a crime for people to be attacking him. The cadres therefore called on party members to assess the individuals seeking political office on their individual qualities.
“If Mr Gbevlo is not liked by the people of this constituency, it is a matter of being rejected at the constituency primaries and that will end the matter there,” the statement said.
The Volta regional executives of the united cadres’ front therefore called for calm and restraint in the Hohoe north constituency.
previous post

Graduates Advise to venture into Entrepreneurship